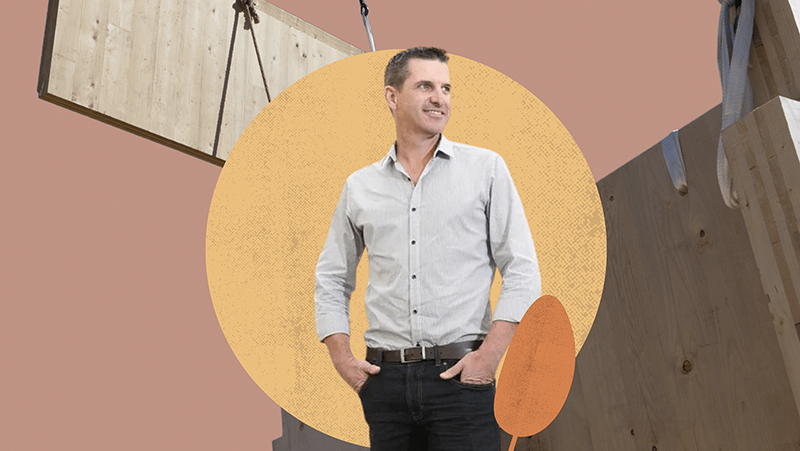 Adam Strong has emerged in a new role as chief executive of Viridi Group, one of the “verticals” established by Kirk Tsihlis through his ambitious impact investment company TrueGreen.

TrueGreen Positive Impact Group stunned some quarters of the market late last year by acquiring four properties in the Sydney CBD, near Town Hall, for about $200 million, flagging it wants to build a taller more sustainable building than Atlassian’s – at a cost of nearly $2 billion.

With Viridi, the company is looking to embed itself in the prefabricated or offsite construction business, primarily in timber.

The new venture, based at Campbelltown, south west of Sydney, is to supply a prefabricated flooring system of timber, steel and concrete, plus additional prefabricated building components that Strong describes as a “kit of parts” that can be put together onsite at around 10 per cent less in cost construction and 30 per cent savings in time.

Essentially, Strong tells The Fifth Estate, the flooring system called “Strongfloor” is a “unique timber and concrete composite that sits between traditional mass timber concrete and is more cost effective.” Each is about nine metres in length and requires minimal labour to install. It also cuts embodied carbon by about 50 per cent on traditional concrete solutions.

The benefits of the composite product is it’s stronger than conventional mass timber and needs no back propping. It will also take half the time of conventional timber.

Strong, whose offsite timber business Strongbuild failed in 2018, is heading the business and after four years is back with renewed confidence and optimism, not to mention a crew he describes as the “A team”, including Robert De Brincat, Nick Hewson and Simon Xiberras, Tim Strong and Daniel Turner.

In four years there’s a lot of water under the bridge but chatting to him last week revealed fresh enthusiasm for the new venture. For good reason.

There’s also growing strength in the off-site or prefab construction industry, especially for its ability to slash waste and neutralise the impact of severe weather events (such as in northern NSW and Queensland lately), or the human challenges and mishaps that occur with old-school building methods. And that’s before we get to the issue of skills shortages.

Factory constructed buildings are also a known avenue for savings on materials waste that can often reach 30 per cent on site – an uncomfortable fact that gets more uncomfortable when paired with the rising cost of materials and today’s frequent supply chain disruption.

Strong, by the way, says his company has a huge store of timber safely warehoused to contend with supply disruptions.

Timber is also increasingly seen as a viable and sustainable source of building materials. There’s the growing appetite for lower embodied energy and the benefits of timber for wellness, which meets the social agenda in the ESG (environmental, social and governance) principles, Strong points out.

So yes, Strong sees a big future ahead for his sector.

Currently there are about 40 people employed at the Campbelltown site, with another facility planned for an industrial estate that Tsihlis’s company is planning at Moss Vale.

He says an advantage of the factory is that it can attract people who are happy to reskill, especially tradespeople such as carpenters whose working life can be cut short by the physical toll their jobs place on them.

“There are lots of carpenters who are over the backbreaking work – older tradespeople,” Strong says.

Work so far has included a four-storey building for Oakhill College at Castle Hill in Sydney, which uses mass timber with the company’s lightweight wall solutions and composite floor.

It may soon also include NSW Schools, for which the company has been pre-qualified and which, he says (along with other industry observers) is doing some interesting and breakthrough work – from a technology and sustainability point of view.

“Schools are a real leader from a manufacturing point of view.”

Another job is making “beautiful bespoke cabins” that will be rented for $2500 a night, by way of indicating that high-end componentry can be built into this product as an add-on to the regular “kit of parts”.

Strong says yet another project is a large house in the Hunter Valley, but he says the company would also be an ideal supplier for social housing agencies.

On flood reconstruction work, he says, “We’ve just put our hands on to get involved; I’ve heard 3000 homes have been condemned”.

The stars have aligned

And he adds that in the past 18 months, the stars have aligned. Manufacturing in Australia is starting to look more attractive as supply chains, especially from China, falter and as globalisation looks to be on the decline.

“Getting advanced manufacturing in Australia is really important. We want to keep every dollar of stimulus in the state and in the country. And we can see everyone’s ESG commitment is ramping up. Directors in organisations are making big commitments and we can make a big difference.”

He touches on what happened with Strongbuild, a company that was leading the field in pre-fab timber construction, until it was was placed into voluntary administration in November 2019.

The upshot from the failure, he now says, was that one Strongbuild related company, the construction arm on the NSW south coast was able to enter a deed of company arrangement and keep trading.

Another was that the balance of high end kit was bought by a timber wholesaler who wanted to prevent competitors using it to snare its own customers away.

TrueGreen later stepped in to buy the kit and establish Viridi and a new business called Composite Systems, which holds the intellectual property for the new produ