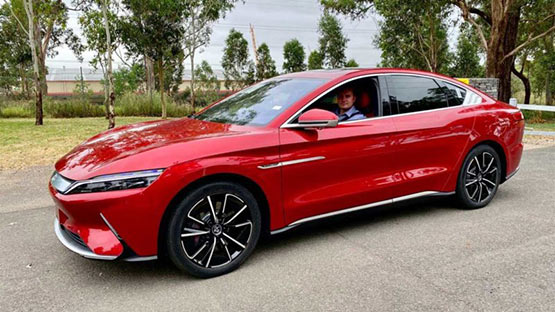 The first BYD electric sedan has arrived in Australia ahead of the launch of a new direct-to-consumer EV buying project to be launched in February.

In a post on LinkedIn on Friday the Australian arm of the Chinese EV and battery maker BYD, which has the backing of US billionaire Warren Buffet, posted an image of the recently imported Han EV which it says will have 605km driving range and use the company’s new Blade battery it first unveiled in March 2020.

Sitting at the wheel of the Han is Luke Todd, CEO and founder of TrueGreen, a company that has a big vision for electromobility in Australia including EVDirect which plans to import four BYD models using a manufacturer-to-consumer model that will cut out the middle man, aka car dealer.

With EV Direct to be launched imminently, the Han with its 180kW electric motor and ability to go from 0-100km/hr within 3.9 seconds is the first off the ranks for those after more choice on Australia’s limited EV market.

It will be joined by the premium BYD Tang electric SUV, a plug-in hybrid crossover called Song, and the BYD Qin (pronounced Chin), a compact sedan that Todd may fit the bill for Holden and Ford fans.

While it doesn’t have the power of the tri-motor Model S Plaid unveiled by Tesla on Thursday (Australian time), the Han leapt into China’s top 10 electric vehicles in December after only six months on the market, China’s passenger car association CAAM reported in January.

In Australia it’s quite the opposite: a dearth of policy to encourage EV adoption has meant some automakers have been unwilling to invest in bringing new electric cars to the local market without the certainty that they will sell.

And while EV pioneer Tesla has had a presence in Australia for some years now and also shuns the dealership model in preference of proprietary showrooms, a combination of negative attacks on electric vehicles by the Coalition government, and concern from dealerships who make a solid return on servicing requirements of combustion vehicles has amounted to many dealers not embracing electric mobility.

While there has been some positive movement in that direction already in 2021 (Kia, for example, has finally secured the e-Niro), for Todd the Han represents the first step towards circumventing the need to convince reluctant dealers to include EVs on their showroom floors.

And in his opinion, the BYD Han is going to please drivers.

“For those that love their cars, I drove this on a private road yesterday and hands down this is the best EV in Australia at the moment. Nothing else comes close.”