Hydrogen-powered buses will shipped to Australia in April and made in Australia from 2022 as manufacturers respond to state governments’ calls for zero emissions vehicles.

“Our customers are saying we want to go from diesel to electric, and we want to start looking at hydrogen,” said Scott Taylor, chief executive of sustainable investment group TrueGreen Impact.

TrueGreen’s mobility division has teamed up with Chinese company Foton, which has already sold more than 600 hydrogen buses in China, to create a new company, Foton Mobility.

The group is making four 45-seat hydrogen buses (capable of carrying 65 passengers including people standing) in China to ship to Australia in April.

It plans to start making hydrogen buses in Australia by the end of next year at TrueGreen’s manufacturing site in the NSW town of Moss Vale with a goal of initially manufacturing 200 buses annually.

“Many customers and state governments have showed high interest in this technology,” Mr Wang said. 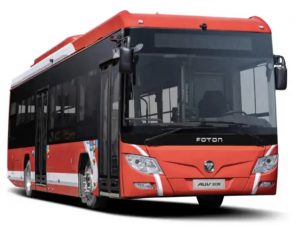 Transit Systems, which operates buses in several states and has 31 electric buses on order for its Sydney routes, said it expected electric and hydrogen-powered buses would eventually operate alongside one another in cities and regional areas.

“There is definitely room for federal assistance in facilitating a faster state-based rollout of zero emission buses,” Mr Feuerherdt said.

NSW has been running zero emission bus trials, examining the feasibility of both electric and hydrogen buses, with the long-term goal of shifting the state’s 8000 public buses to zero emissions vehicles by 2030. It plans to introduce at least 50 electric buses this year.

Other state and territory governments, including Queensland, have also announced plans to shift to zero emissions buses. French transport group Transdev will trial a 39-seat solar-powered electric bus in Brisbane over the next two years.

Hydrogen technology, which is already being used in trains and buses in Europe, is being investigated for Australian transport networks because vehicles with hydrogen fuel cells can travel further than electric vehicles without needing recharging (electric buses typically recharge for 4-6 hours overnight.)

But the cost of hydrogen buses still exceeds electric and diesel buses, with the price of hydrogen running at between $8 and $10 per kilogram. Hydrogen is not expected to become competitive with other technologies until the price drops to around $2 per kilogram.

But the ability of hydrogen-powered buses to travel hundreds of kilometres before refuelling and their limited environmental footprint (hydrogen emits only water vapor) makes hydrogen promising as an energy source in the medium to longer term, the report concludes.

Billionaire Andrew Forrest flagged in January during his Boyer lectures that the Fortescue Metal Group’s trucks would eventually be powered by hydrogen, arguing that the world will never run out of hydrogen (which is currently mostly produced using fossil fuels but can be made using renewable energy sources such as solar power).