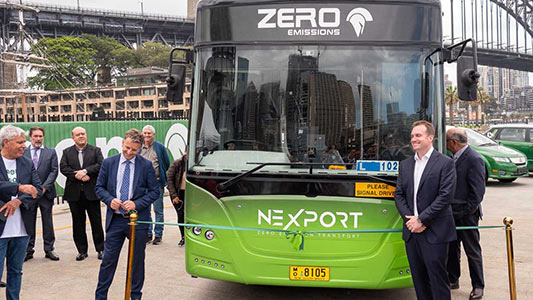 TrueGreen and Nexport lay out $700m plan to make electyric cars, buses and trucks in NSW

Cleantech investment company TrueGreen and its electric bus subsidiary Nexport have announced a $700 million plan to create a new electric vehicle manufacturing industry in Australia,  based at a newly acquired site in NSW’s Southern Highlands.

TrueGreen, which describes itself as a “positive impact investment group”, and Nexport, which says it is the largest supplier of electric buses in Australia, says the initiative has been inspired by the NSW Liberal government’s goal to transition its bus fleet with the purchase of 8,000 electric buses.

But the new manufacturing facility – located on 51 hectares near Moss Vale – will not just make electric buses, it will also make electric cars, trucks and deliver vans and other cleantech products.

“It’s vital to Australia’s long term future and prosperity that we look for advance cleantech manufacturing opportunities that we can export to other countries.

As noted on Friday by The Driven, TrueGreen is also the parent company of leading Australian electric bus manufacturer Gemilang which is supported by Nexport, a company that has, among other things, introduced an electric taxi service in Sydney’s Northern Beaches using Chinese EVs made by BYD.

Todd believes Australia can seal a prosperous future by embracing change and becoming a leader in clean technology innovation. In the transport sector, that change is being led by electric vehicles, even if there is only very thin support in Australia for the EV transition.

TrueGreen last month undertook a large stage one capital raising, and added a number of investors, including Nick Politis – the biggest shareholder in AP Eagers, Australia’s largest car dealership, and an institutional round of capital raising will be open to investors next month.

Todd says the 7-star-rated, zero emissions car making facility in Moss Vale is planned to be operational within five years, and is expected to create 2,000 skilled jobs for the region.

The electric bus models, some of which have already been deployed through a trial in the Sydney suburb of Leichhardt, are able to deliver around 500 kilometres of range and can be charged within four to six hours.

Until the facility is in operation, Todd tells The Driven that Nexport will make more electric vehicles available to Australians via an EV import platform. The company already has orders for 115 buses, that will be build offshore, but the company intends to dramatically increase the local content when delivering its next round of bus orders.

Nexport is planning to import the BYD Tang electric SUV, the BYD Song plug-in hybrid crossover, and the BYD Qin (pronounced Chin), a compact sedan that Todd thinks will fit the bill for lovers of Holden and Ford sedans.

This is not the only plan to kickstart a new auto industry in Australia. In June, The Driven reported on start-up H2X’s plan to make hydrogen-powered cars and commercial vehicles at NS’s Port Kembla, but TrueGreen’s plan is the most broadly encompassing one so far to build electric vehicles to support the public transport, logistics, and passenger markets.